Novegrad has an official policy of religious freedom and separation of church and state.

Christianity is by far the dominant faith in Novegrad, although divided among several different denominations. Christianity is the dominant religion among all ethnic groups native to Novegradian territory, with the exception of the Jews (who practice Judaism) and the small population of Enets (who practice traditional Shamanist beliefs). Religious divisions tend to fall along ethnic lines. 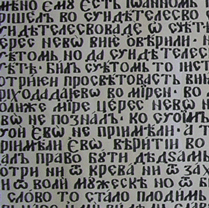 Among Finns, Estonians, and Latvians, Lutheranism is the main faith. However, Orthodoxy has a significant presence in these territories as well, and is continuing to grow.

Many other faiths are present, but generally came with immigrants from other nations. These include Islam, Buddhism, Catholicism, and a number of Protestant denominations.

It is hard to determine how much of the population is practicing, however. While the majority of Novegradians say they are Orthodox Christians, only between 30% and 40% attend services at least once a month.

Orthodoxy in Novegrad dates to the 10th century, during the time of Kievan Rus'. The Slavs of Rus' had been pagans, following a traditional Slavic pantheon related to that of the Norse and of the Ancient Greeks. Although this story is likely apocryphal, it is said that in 987 Grand Prince Vladimir of Kiev sent out emissaries to the neighboring nations, all of whom had been trying to convert the Rus'. The emissaries to the Muslim Bolghar state returned saying there was no gladness, only sorrow, and that they were not allowed to drink alcohol or eat pork. Vladimir replied saying "Drinking is the joy of the Rus'". The emissaries from Jewish Khazaria returned, but said that the Jews' loss of Jerusalem was evidence of them being abandoned by God. The emissaries returned from the Catholic Germans, but said there was no beauty to be seen in the gloomy German churches. Finally, the emissaries to the Orthodox Byzantine Empire returned, and reported the marvellous beauty of the churches and the Byzantine services, saying they could not tell whether they were in Heaven or on Earth.

In 988 Prince Vladimir was baptized into the Orthodox Church. He returned to Kiev, destroyed the statues of pagan gods, and invited the Kievans to the Dniepr River to be baptized by Byzantine priests. This event is known as the Baptism of Rus', the introduction of Christianity into the Rusan kingdom. Similar baptismal events then occured around Kievan Rus', bringing more people into the faith. Pagan practices continued to be practiced in some areas, however, that were fiercely resistent to conversion, though within a few centuries even these regions were converted.

The Cathedral of St. Sophia in the center of Novegráde Velíkei is symbolic of Orthodoxy in Novegrad. The current building was built between 1045 and 1050, making it the oldest church building still standing in Novegrad, as well as the oldest building still in usage. The stone cathedral replaced an earlier wooden one built in 989. It is considered the mother church of the Novegradian patriarchate and is the seat of current Patriarch Śergéie II. However, due to the small size of the church, most major services (such as Pascha) are performed at the much larger Holy Trinity Cathedral in the nearby Velíkei Duóre square.

As Novegrad grew, missionaries and settlers spread the faith to new peoples and territories. The church gradually gained some local autonomy, and became completely autocephalous in 1472.

In the mid 17th century, a series of reforms by Patriarch Nikon of Russia were brought upon the Russian Orthodox Church, in an attempt to bring the Russian and Greek traditions more in line. This led to a schism in the Russian Orthodox Church, as many people, known as the Old Believers, refused to accept the reforms. However, the reforms were largely accepted in Russia and over time the number of Old Believers dropped. However, in Novegrad no such reforms occurred, meaning that for a long time Novegrad practiced the most conservative Orthodox liturgy. However, during the union with Russia in the 19th century, a number of Russian traditions became commonplace, while many other traditional Novegradian ones held their ground. In modern churches, for example, the sign of the cross is made using three fingers instead of the traditional two, but the traditional phrasing for the Creed and a number of prayers is preserved, while they were adjusted slightly in the Nikonian reforms of Russia.

Services are generally performed in the local language, usually Novegradian, although a number of prayers and chants (including the Lord's Prayer and the Creed) are still recited in Old Church Slavonic, the liturgical language of the Slavic Orthodox Churches. Bibles are other texts are available in both Novegradian and Church Slavonic, but Novegradian is used for most purposes due to the general difficulty of understanding Church Slavonic to those who have never studied it.

Lutheranism has a large number of followers in Finland, Estonia, and Latvia, where it is considered the traditional faith. It was brought to Finland by the Swedish settlers, and was originally a branch of the Church of Sweden until Finland was transferred to Novegrad. The history is similar in Estonia. Latvia was originally Catholic, but under Swedish, Prussian, and German influence, many of the Catholics left or were converted to Lutheranism.

Under the rule of the Novegradian tsars, Lutheranism, though not outlawed, was suppressed in favor of Orthodoxy. Orthodox churches were established in many city centers, often displacing Lutheran churches. Under Soviet rule, however, both were suppressed as the state was supposedly made atheist. Since the Great Thaw, the Lutheran church has returned in this regions, although recently their growth has begun to slow in comparison with Orthodoxy.

Relations between the two churches are a little frosty, however, due to the Orthodox Church's increasing presence in Lutheran territories and quite different doctrines.